Two Men & A Vacuum Take on a Garage 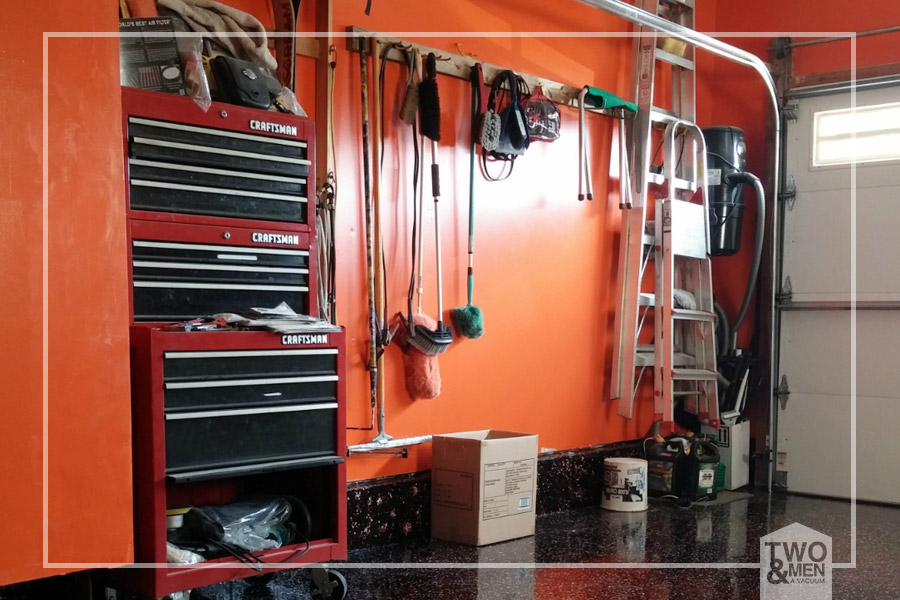 Joe was out in his garage trying to change the oil in his car. He was on his back, holding a flashlight, and sweating as he tried to turn the final twist on the oil bolt. Then disaster struck: the bolt dropped, the oil began to spill, and Joe quickly found himself in a pool of fluid. As the fumes hit his nostrils, he pushed himself out from under the car and reared up in disgust.

His garage was cluttered and dingy, so much so he could barely find a rag bag to wipe up the mess. Joe worked 50 hours a week and barely had time to visit with his family, much less attend to his dirty garage. It have been months since he had a large block of time to attend to all the mandatory cleaning chores and activities. His wife was on his tail for letting the garage get into such disarray, however it was down on his priority list compared to work. Any free time he had he wanted to spend relaxing with his wife and kids. Frustration with the dirty windows, grimy walls, and now this oil leak pushed him to the edge. He needed help and needed it fast.

Not just any cleaning service would do: for this task, it needed to be a superior service that could fully customize to the situation. One that was well trained, bonded, and insured. Someone who could do the job and do it right. This spill triggered the memory of a passing comment from a neighbor stated several weeks ago. His friend had raved that the eco-friendly cleaning company, Two Men & A Vacuum, had done an amazing job with his kitchen after a particularly wild party. Joe wondered if they had a similar talent for garages.

In this moment of crisis, Joe decided to give Two Men & A Vacuum a call. They arrived promptly with all the necessary equipment to clean the oil from the floor. He was impressed with their efficiency and friendliness. In addition to cleaning the spill, they took care of the other pressing issues as well. They removed greasy hand prints from light switches, doorknobs, and walls. Fertilizer and potting soil that had been spilled months ago was finally vacuumed. All cob webs and mice nests were banished from the premises and they washed the windows.

A few hours later when they left, Joe was relieved to show his ecstatic wife the newly cleaned garage. It was great to have these important but neglected tasks handled by professionals. After a family dinner and while playing a board game with his children, Joe wondered why it had taken him this long to call Two Men & A Vacuum. His garage was back to full functionality and his wife was happy. He knew now what to do if he ever faced cleaning problems again in the future.